Product Hunt Launch: How this newsletter became #1 Product of the Day

The sky was blue. The grass was green. The birds of Copenhagen were singing, and like pretty much every living being in Denmark, they seemed a little happier than what's natural.

What made this Monday different was that I did something I've never done before.

I launched on Product Hunt.

To be specific, I launched this newsletter. And it reached #1! 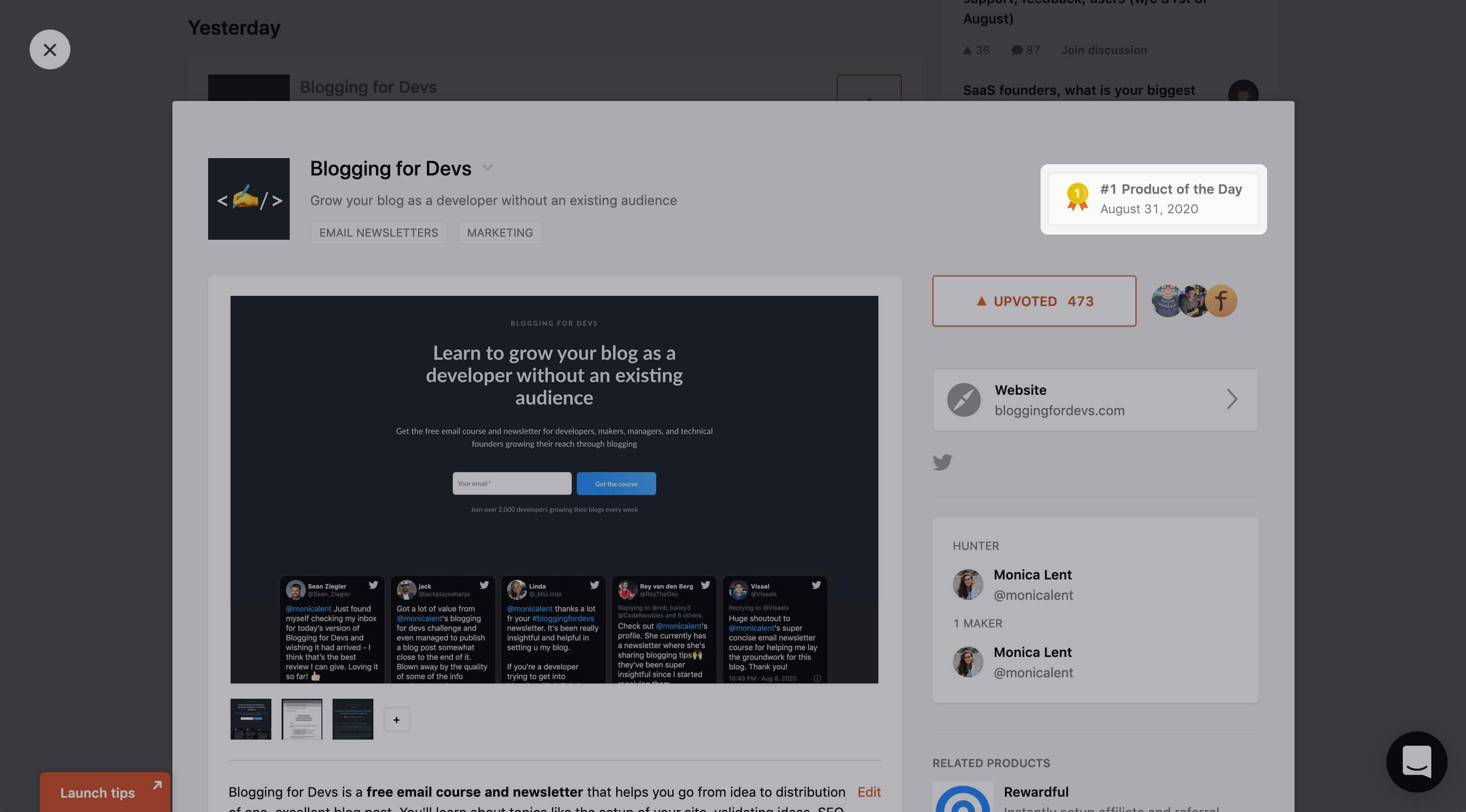 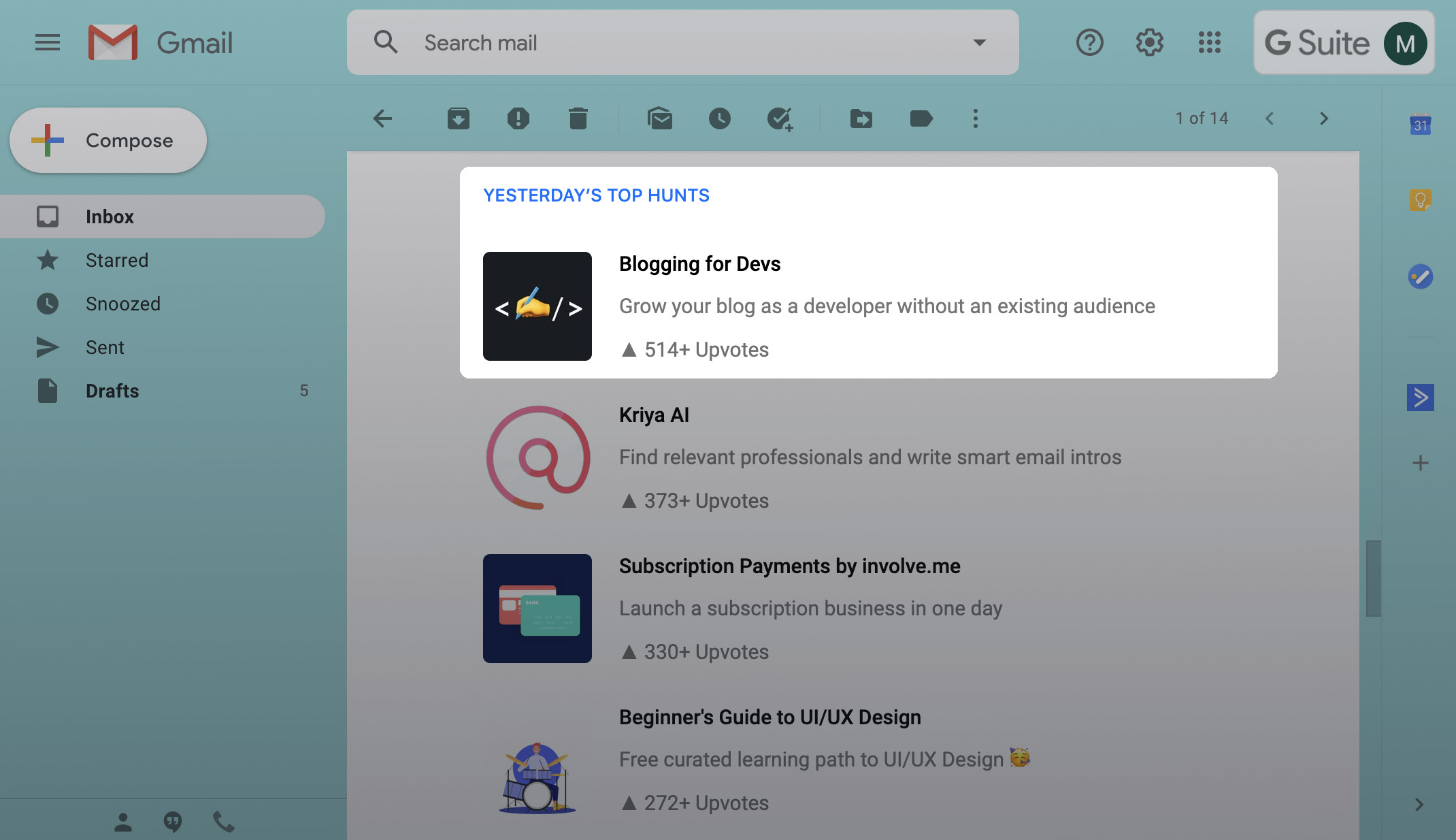 Clearly as it was my first time, I'm no expert at launching on Product Hunt, launching in general, or even running a newsletter to be honest.

I'm just learning as I go.

But as a nosy person myself, I thought it would be fun to share a bit of the behind the scenes of the Product Hunt launch:

This post won't be long. It's mostly be screenshots and lists.

Hopefully it'll encourage someone out there who, like me, who's never even thought about launching on Product Hunt.

Maybe it's more attainable than you think :)

Again, I'm not an expert at this, but maybe there are bits about my launch you can learn by having a look behind the curtain.

Results: Did the Product Hunt Launch actually attract the right people to visit and subscribe?

We'll look at traffic, subscribers, and conversion rate by referrer. I'll also compare it to the first "launch", which I did on Twitter.

To summarize some of the metrics from the Product Hunt Launch:

Here's a look at this in a visual way.

How much traffic to expect from Product Hunt

Here's the traffic that Blogging for Devs received from Product Hunt in the #1 position for almost 24 hours. 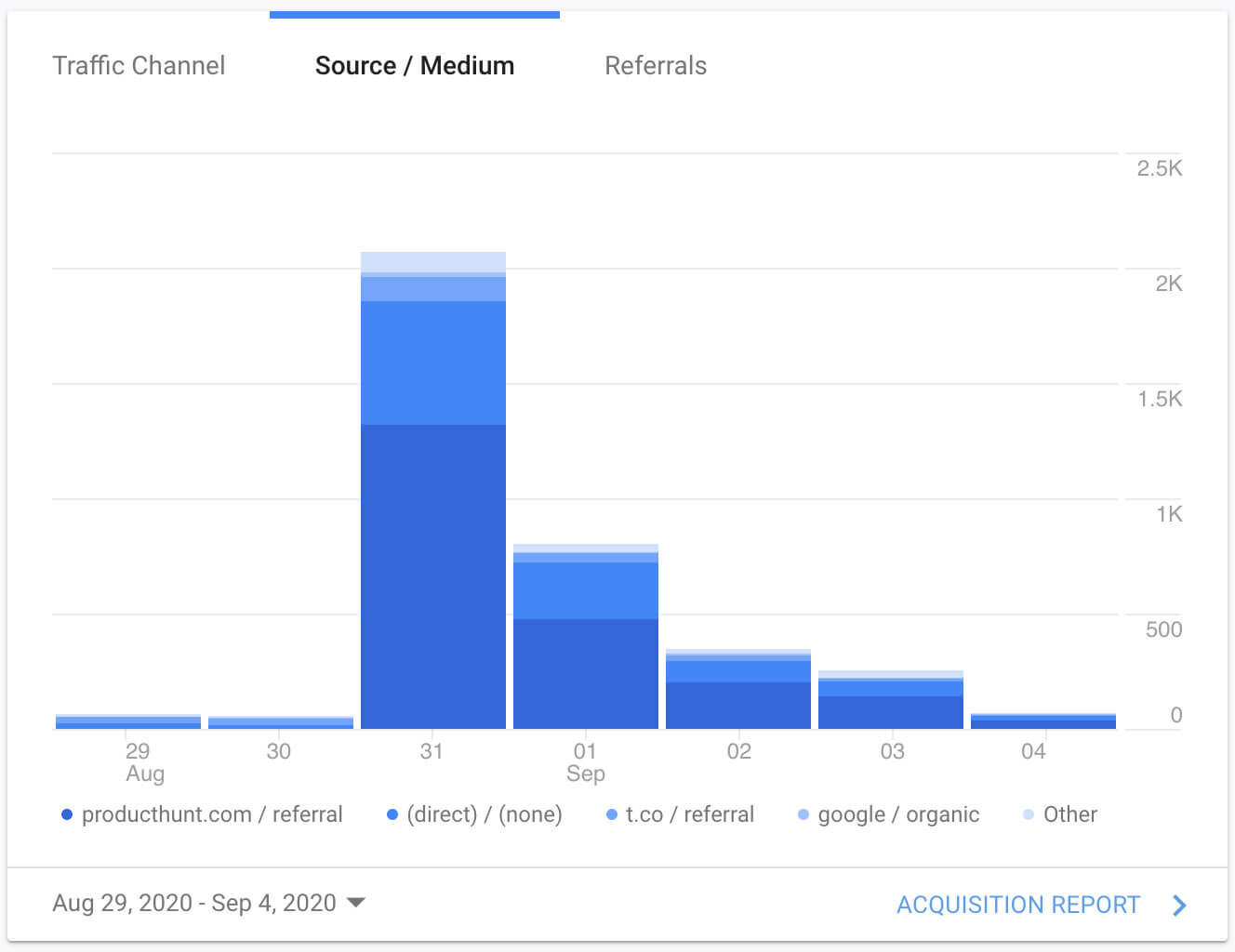 In total, about 1.5K users visited Blogging for Devs from Product Hunt during its tenure in the first position. Including the following days, this number grew to about 2.3K users (between Monday and Friday afternoon).

How many signups came from Product Hunt 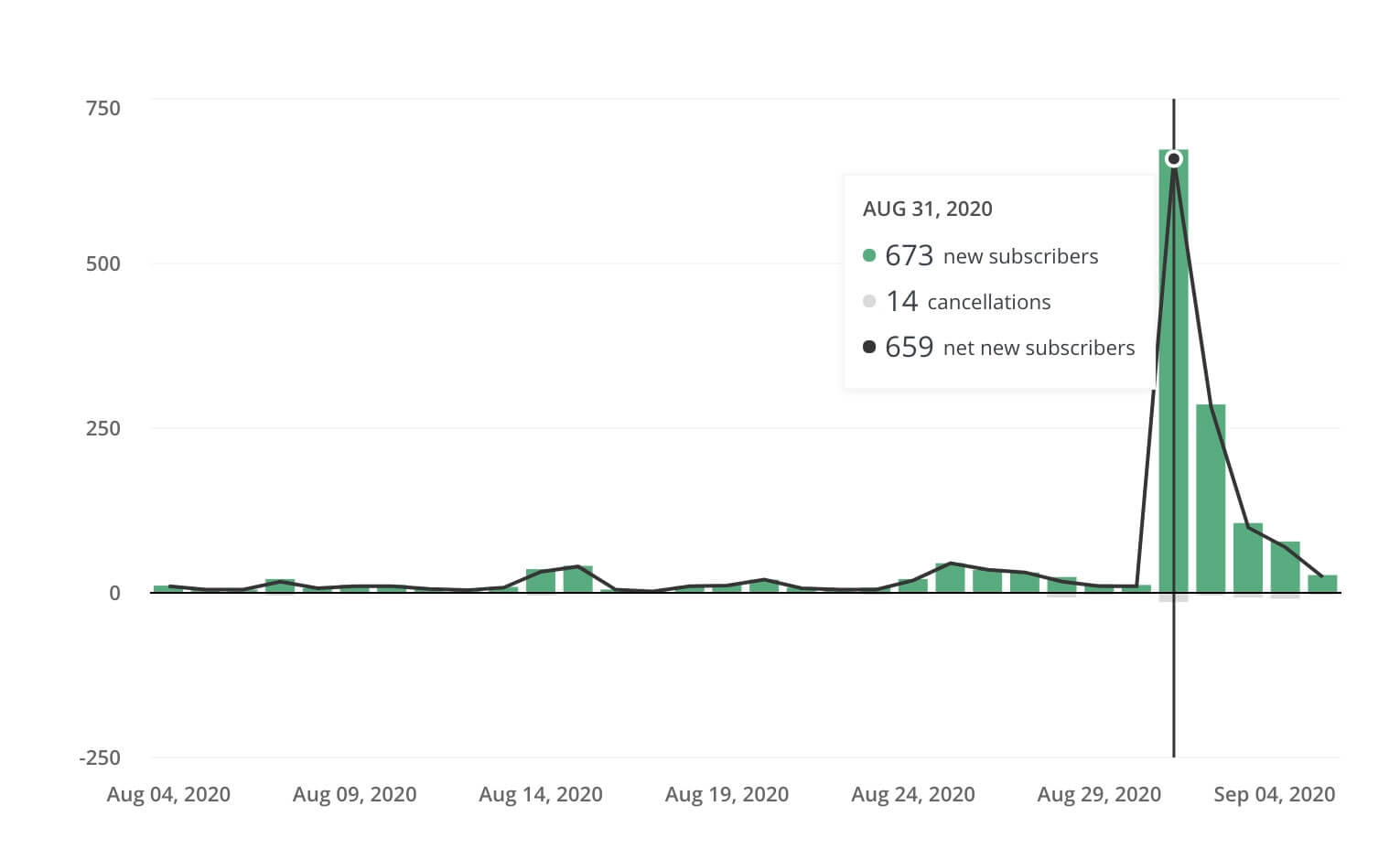 They became subscribers at about a 30% conversion rate. 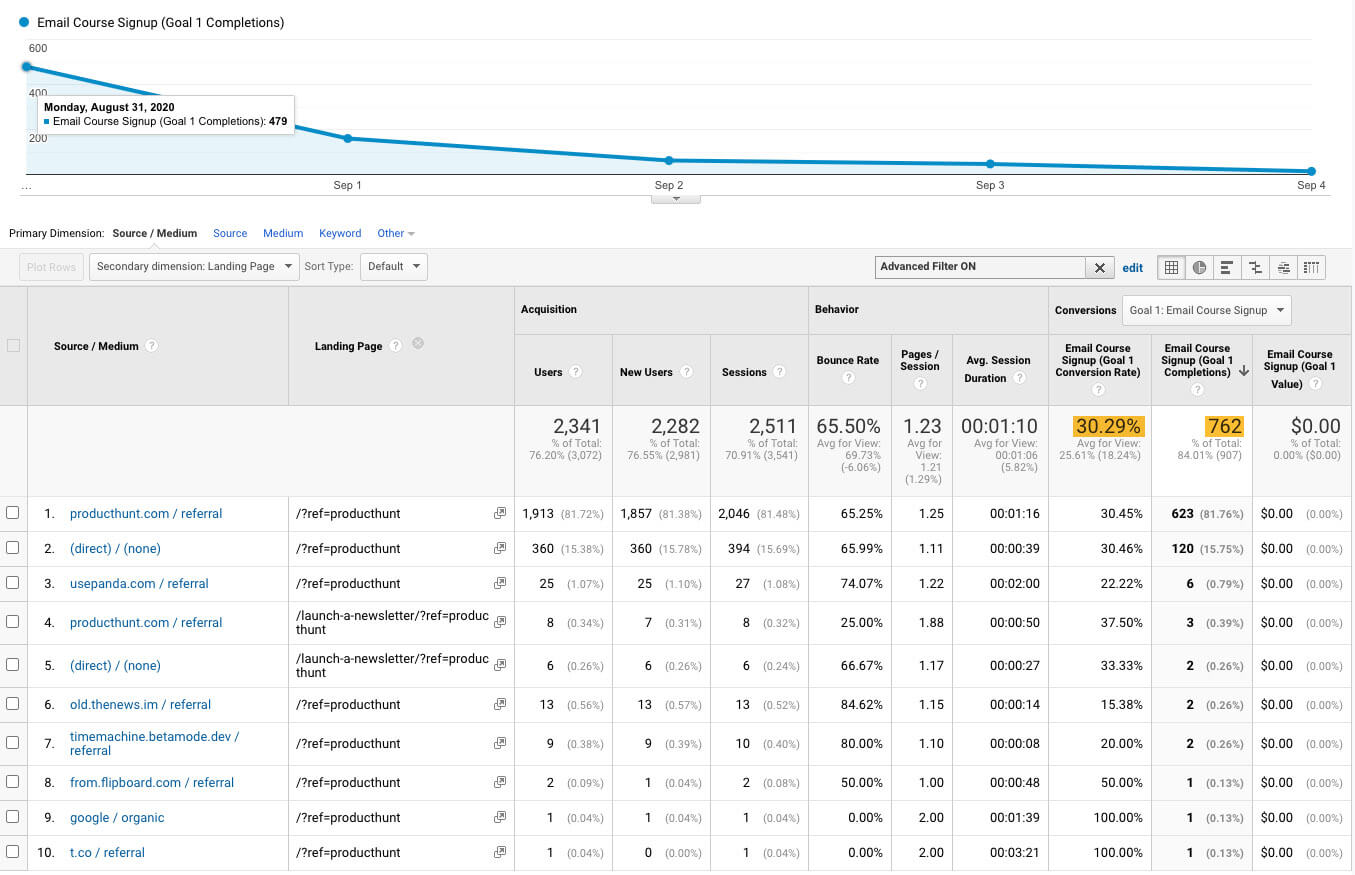 (One thing I haven't tried to figure out is if this could be because of timezone differences. Treat all of these numbers as approximations!) 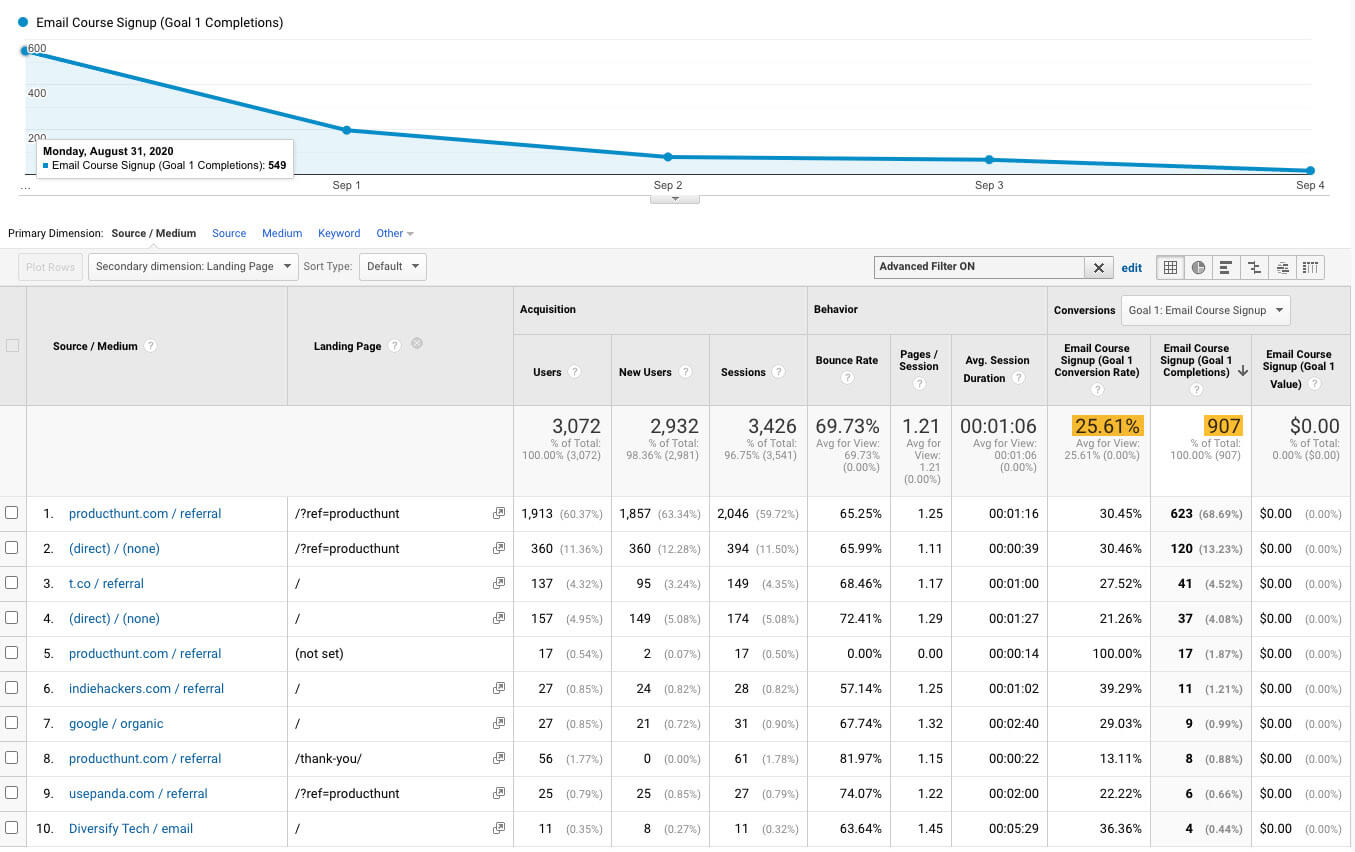 The last chart before talking about the actual process is a comparison between launching on Twitter vs. launching on Product Hunt. 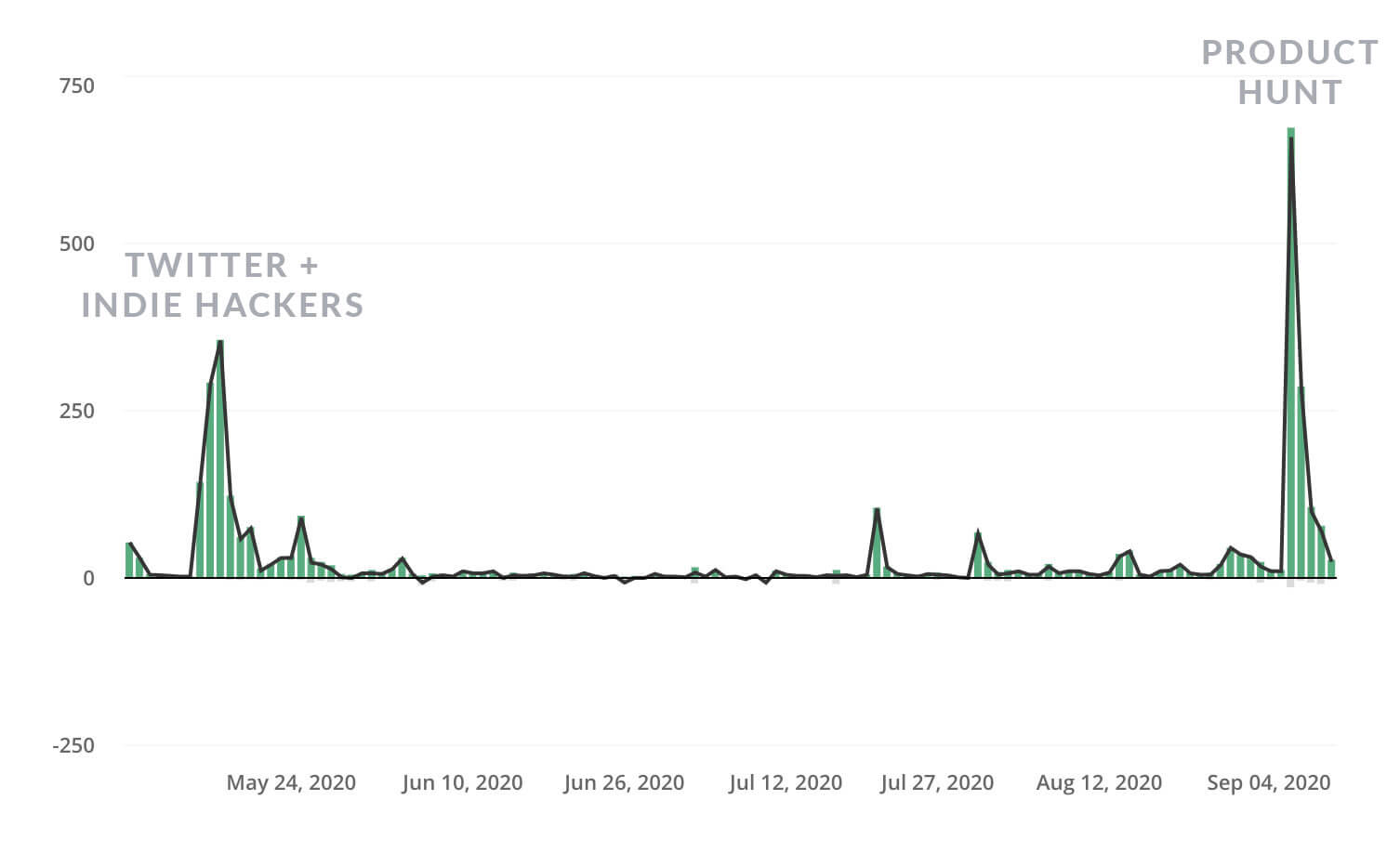 The first big spike in the chart is from when I launched the email course on Twitter.

The second big spike is from Product Hunt.

If you're interested in learning more about the initial launch on Twitter, read this other article about launching a newsletter.

Here's where I started, how I prepared to launch, and a precise look at how I promoted the launch.

Preface: What I started with before the launch in terms of reach

I want to be clear that the launch wasn't just a matter of putting something neat on Product Hunt and getting 100% lucky.

I definitely had a few channels for letting people know I was launching:

I totally get these numbers might seem super high.

At the same time, I believe I have the newsletter subscribers to thank for showing up with their support.

1,800 might seem like a lot of people (who am I kidding, it is a ton of people!) but when it comes to "email lists" it's still pretty modest.

Yeah, scale is a weird thing.

I was pretty lazy about this, so I didn't do any of these crazy 20-point checklists where people send emails to everyone in their address book and ask for votes.

That's it. It actually wasn't too bad. I mostly prepared on Saturday, scheduled everything for a Monday launch, and that's it. 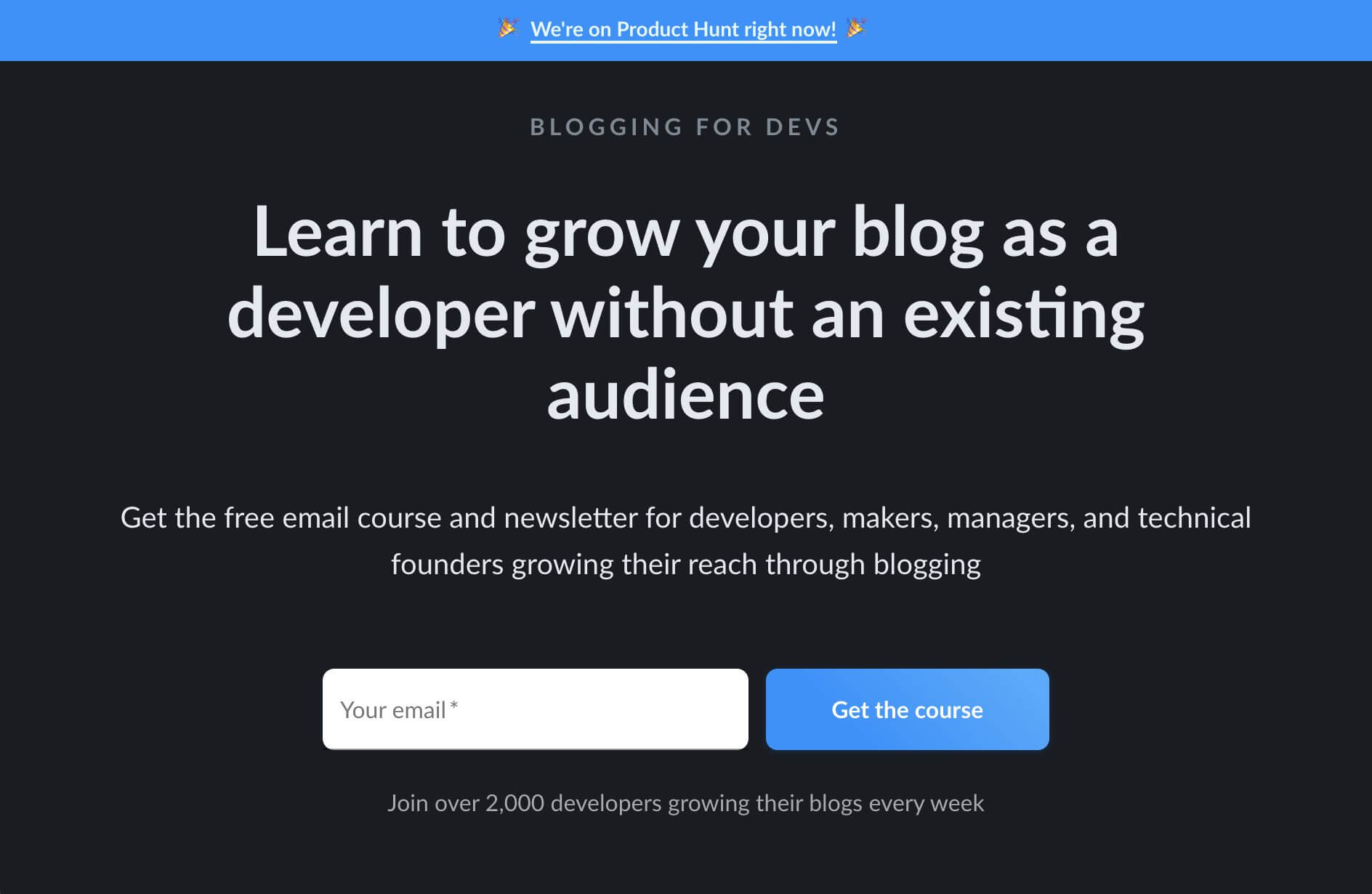 Execution: For better or worse, what I actually did to launch

Here are some specific screenshots of the elements of the launch in terms of getting the word out: 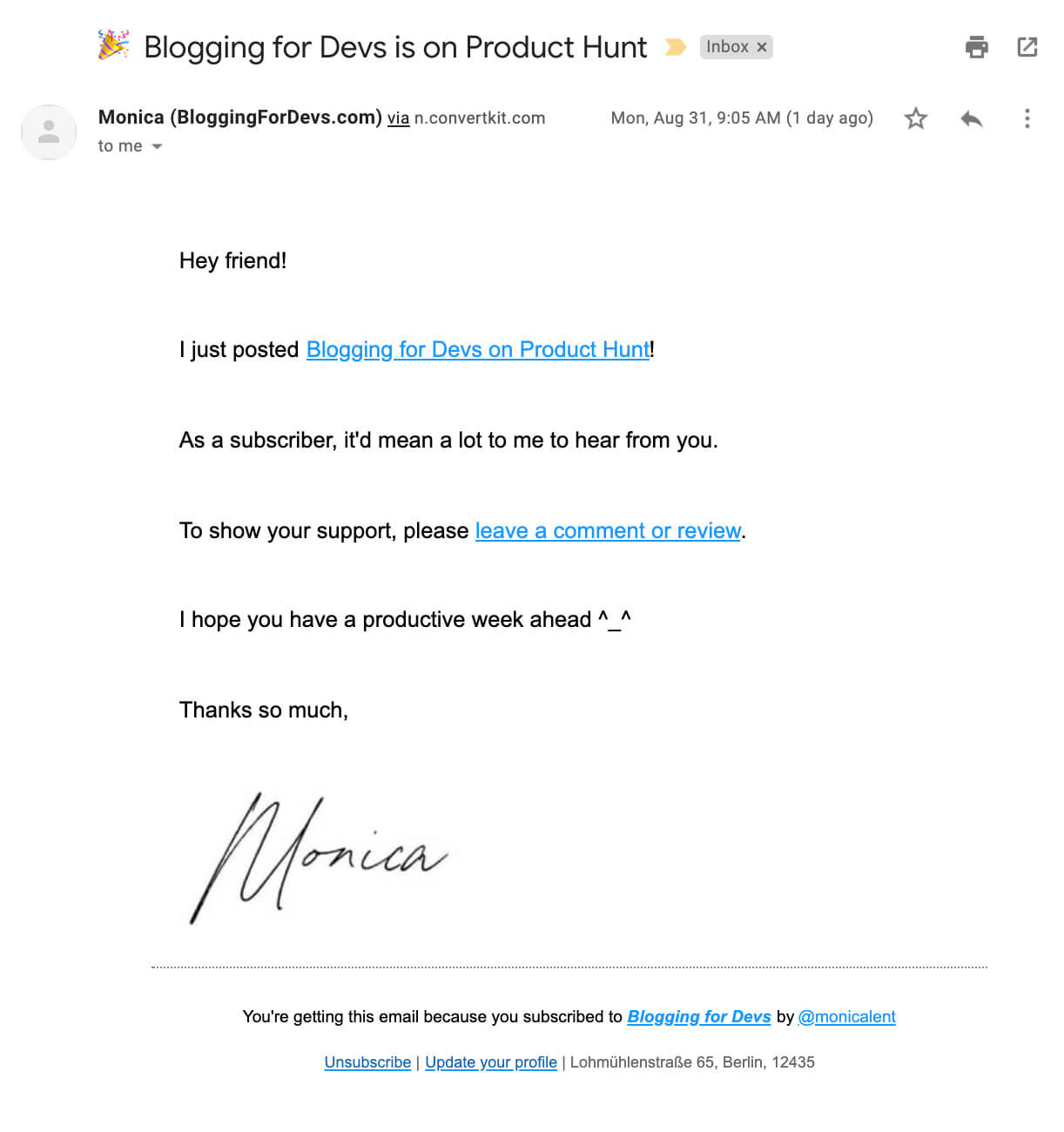 From ConvertKit's analytics, the links got 216 clicks from 11.6% of subscribers. The email itself had about a 46% open rate (bearing in mind, lots of developers have software that blocks open tracking like what ConvertKit uses).

Announcing via Twitter (and updating the thread with a few stats)

This is the tweet where I announced that I was launching on Product Hunt. Below, you can see some of the stats about how many people saw and clicked on the link in the Tweet.

I have no idea what I'm doing but here it goes:

Blogging for Devs is on Product Hunt 🎉

Send your tips/prayers/etc. If there's anything worth sharing during the day, I will share it here :)https://t.co/lkDZ6U3K9b 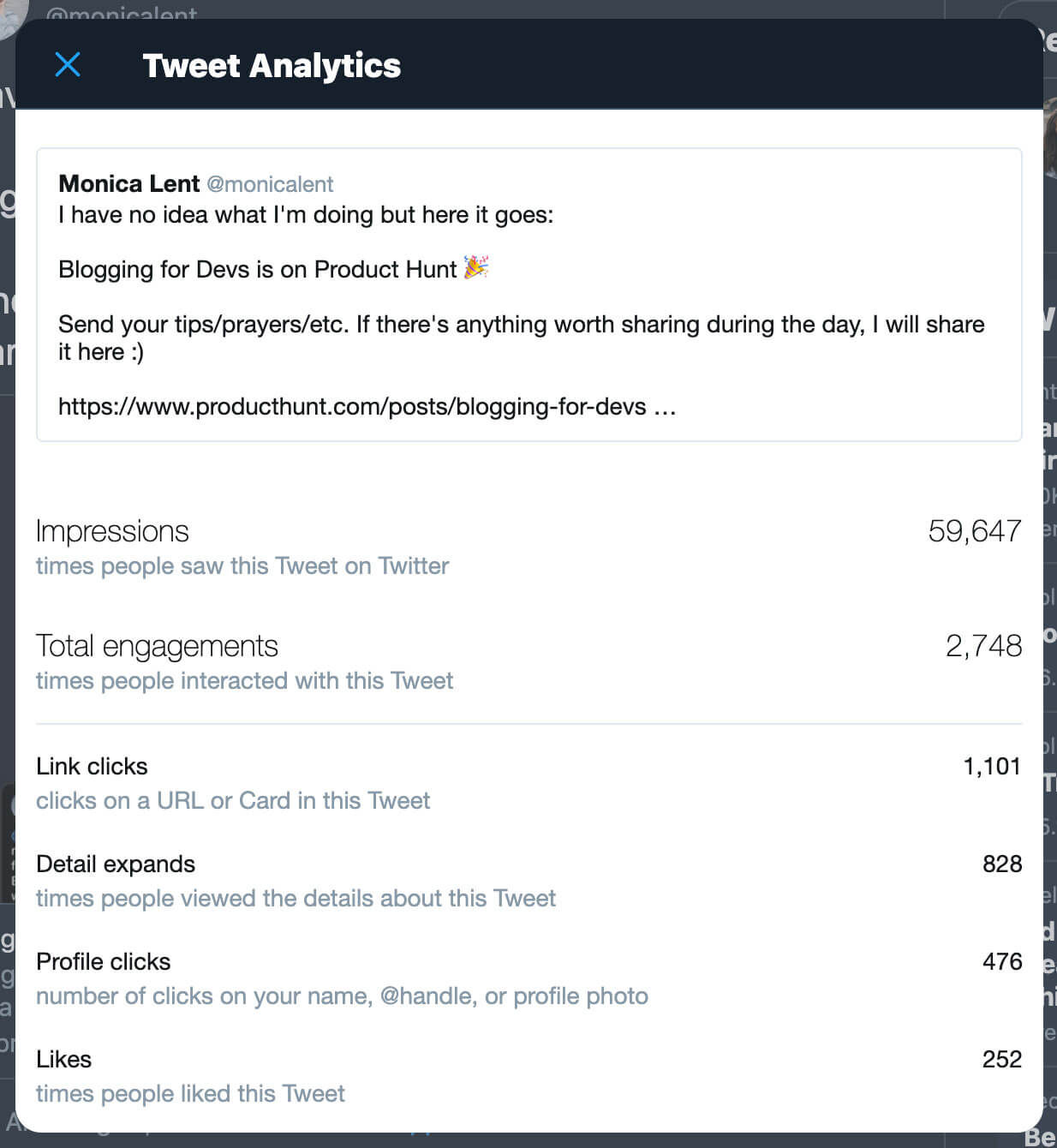 The reach is pretty wild, I have to say. That this tweet sent over 1,000 people to Product Hunt is massive.

I did update it throughout the day so it had a chance to resurface in people's feeds.

Those two things are mostly the only thing I did to actively promote the launch. No spamming of long-lost acquaintances or other hacks 😁

Reflection: What advice I followed, what I ignored, and my hypotheses about the winning elements

There's a lot of advice out there about how to "optimize" your launch on Product Hunt.

As this my first launch, it's hard to draw generalizations. Nevertheless, here's the advice I received and followed about the launch:

Product Hunt advice that worked for me 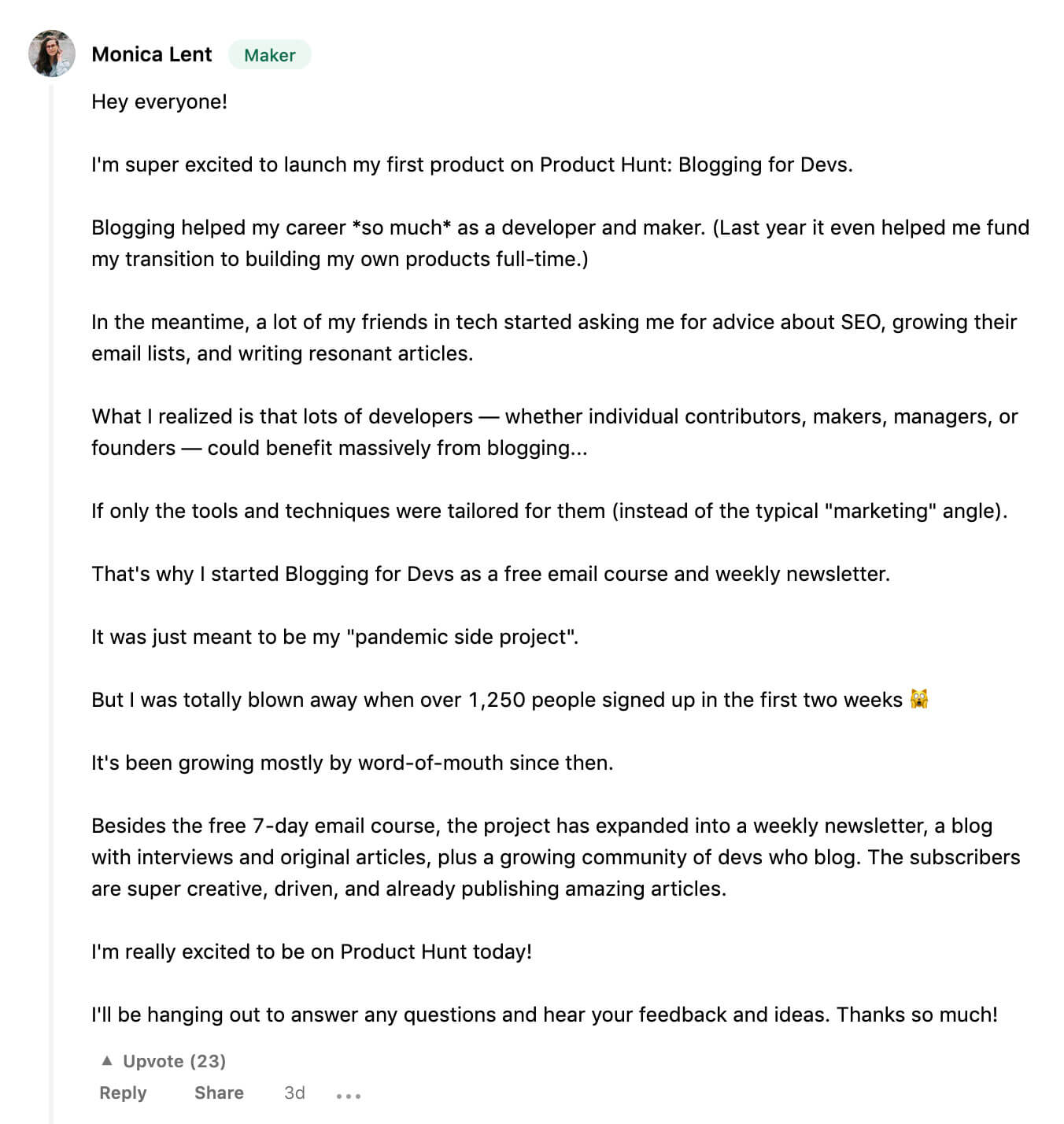 Why I think the launch went well

What surprised me about launching on Product Hunt

That's pretty much it. If it I had to summarize, my learning would be:

Launch on another platform like Twitter first. Create things that help people achieve a goal that matters to them. Reply to every subscriber's email and be as helpful as you have the capacity for. The more you give, the more you get in return :)

It's easy to break down something that "worked" and look smart afterwards.

In reality, I never planned to launch on Product Hunt at all so there was never a "master plan" to "build an email list" before launching there, or that one day all the hours of answering subscriber emails would "pay off".

I just did a thing and it seems people like it. Which is super motivating!

Thanks for reading, I hope you found some takeaways or things to try for your own launch on Product Hunt. Later days ✌️

Take the free 7-Day Blogging for Devs Email Course and learn how to grow your blog without an existing audience through great writing and SEO.