Launching a Newsletter: How We Reached 1.2K+ Subscribers in Under Two Weeks 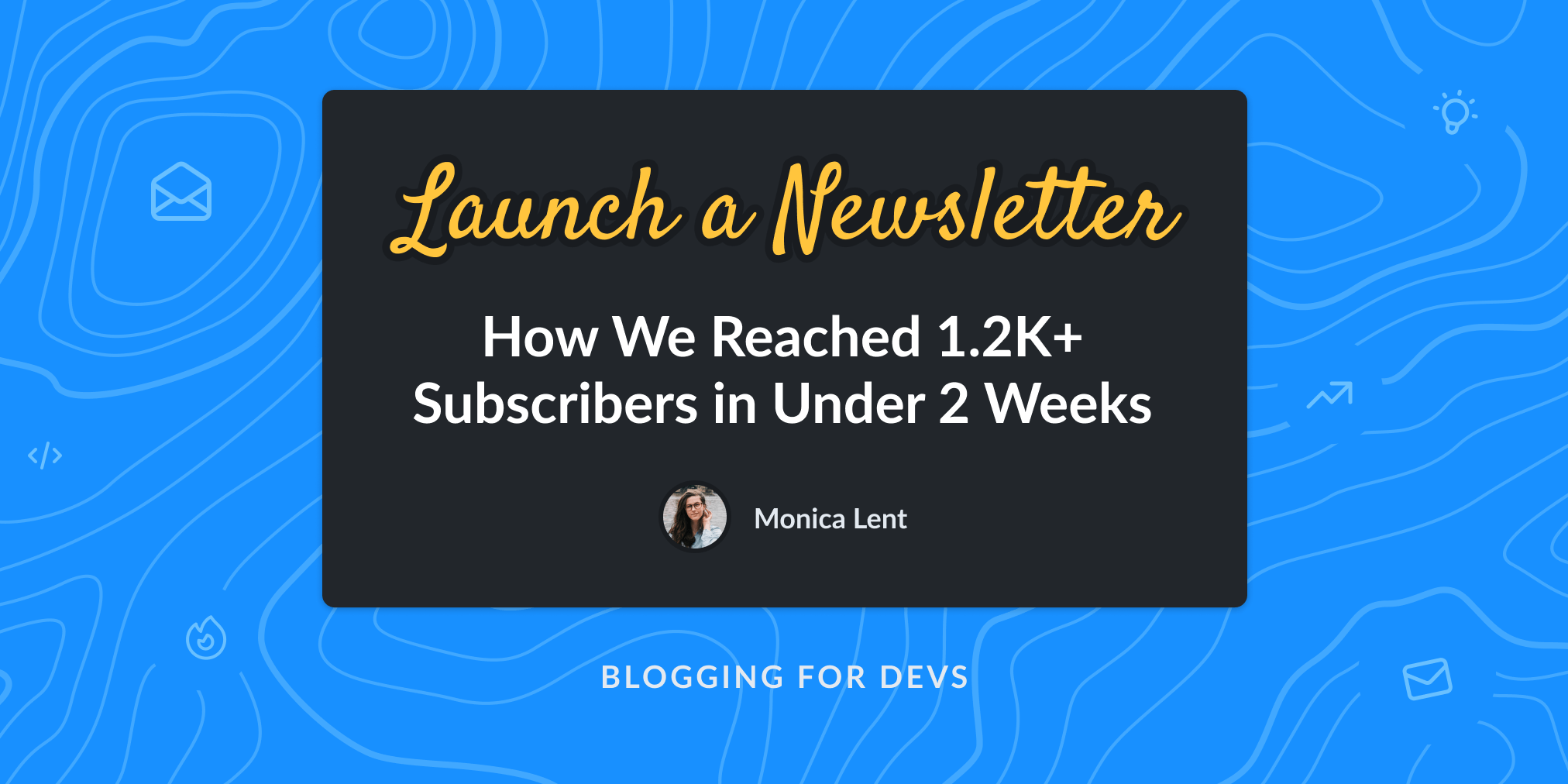 When I launched the Blogging for Devs newsletter, I had no idea it was going to take off like it did, resulting in over a thousand subscribers in such a short time.

As with a lot of things, once you get a sense for the audience and what they value, you do develop a strong intuition of what will resonate with them.

But still — I was surprised.

A month after launch, and the newsletter is still growing every day. We'll soon reach 1,500 active subscribers!

And that's without any real additional promotion after the launch itself.

These days, most people arrive from word-of-mouth recommendation.

In retrospect, there are a lot of factors that made the newsletter launch so successful. So in this somewhat "meta" blog post, I want to explain exactly how I came up with the launch strategy, executed it, and what I learned in the process.

Why and how I created the free email course

My goal with the course was simple: to validate the idea that developers are even interested in growing their blogs.

I've learned so much about blogging, but I didn't want to commit to any big projects without first testing whether people are even interested in it.

Originally, I planned a 14-day course and no newsletter. But the scope was too big, and I got the feedback that the content didn't feel "actionable" enough.

So, I pivoted to a shorter 7-day course in the form of a challenge, and cut out a ton of material, with the understanding I can keep sharing more tips and ideas afterwards.

I used ConvertKit to create the course as a 9-day sequence that starts once you sign up: 1 welcome email, 7 lessons, 1 conclusion email. By setting it up this way, "late joiners" wouldn't miss out or join part-way through.

It also helped me make tweaks to the content as you were sending me feedback, since not everyone started on the same day. This wasn't really intentional but it saved my butt!

Effective channels for promoting the newsletter

Luckily I had the foresight to track the referrer as a hidden field inside the ConvertKit signup form, so I could attribute not just the general source (Twitter) but more specific tweets and locations because of their t.co URL shortener (which gives unique URLs, even if it's to the same domain).

Here's what the subscribers look like, broken down by referrer: 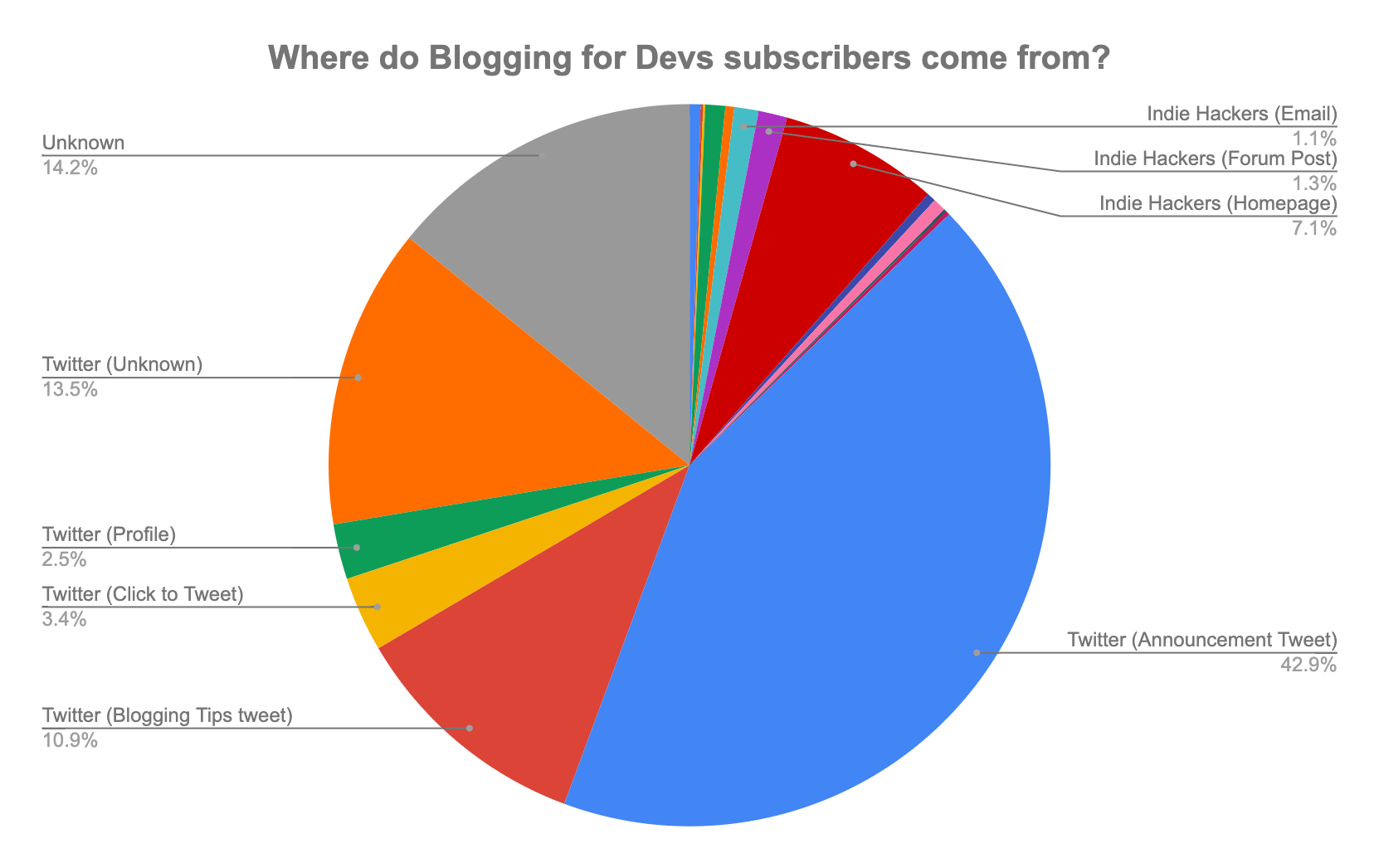 I'm guessing that the "Unknown" traffic is what we typically called "Direct" traffic, someone sharing in places like Slack, WhatsApp, Discord, Instagram, Email, etc. where the referrer is intentionally stripped by the platform.

I am a little surprised at how big the direct slice is. But it's kinda cool because it probably means a lot of deliberate sharing of the URL 😍

Here's how the subscriptions grew over time, in two waves: 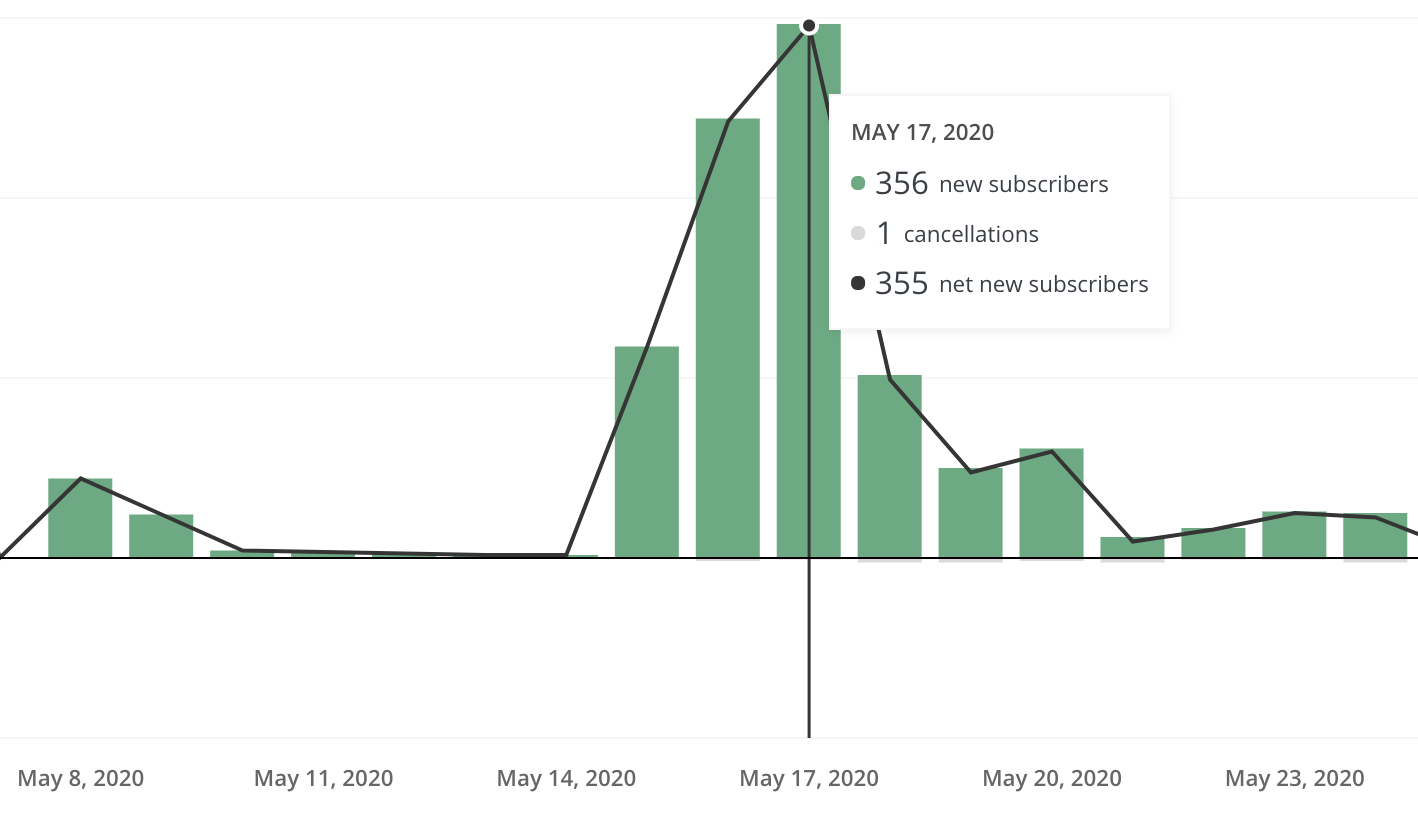 In the mean time, as the newsletter has been running for the last month, most subscribers anecdotally through the pinned tweet on my profile, though I haven't reanalyzed the referral data now that we're at almost 1,500 active subscribers.

With this data, plus all the things in my mind from the conversations I've been having with you one-on-one, here's what I learned and would do differently.

Tips for a successful newsletter launch (based on this experience)

My goal with the landing page is to keep it simple and focused on the message:

Blogging as a developer can change your life. But it doesn't happen without a strategy — and that's how I can help you.

The social proof is limited to a screenshot of a Google Analytics report. The text isn't too long. There's just one button to sign up.

In my opinion, developers hate marketing so the less I could make it like a typical marketing landing page, the better.

The result was something like a 50-60% conversion rate on the page, though I don't have precise enough tracking to give an exact number.

2. Giving away value without asking for anything

It's funny, only one person told me they thought the free email course was a funnel for something paid (it's not).

That person was a marketer, so I guess you get jaded working in that environment.

In a lot of circles, it's unthinkable that people give away something of real value for free, no strings attached.

But that's exactly what I did. I just made something free, quality, and valuable.

At the end, I had a lot of people asking me if I had a paid course (I don't) or an ebook to sell (nope, don't have that either). So I guess it would've been an effective sales funnel, but that wasn't my goal.

My goal was validation (as I said before).

3. Speaking the language of the reader

If there's anything I've learned from conference speaking, is that if you're thinking it, other people are thinking it and they'd be glad if you addressed those concerns.

So there were a few key messages I emphasized on the landing page that resonated with people:

I also think having just enough humor on the landing page helped keep it from being salsely and more friendly.

4. Getting a TON of feedback

I spent over two weeks working consistently on the content and I had a group of about eight people who've now gone through three versions of the email course.

If I hadn't sought feedback I probably would've launched with something that just didn't resonate with people the same way.

5. Building in a viral loop

Even though you can see that only 3.4% of people came from "Click to Tweet" re-shares in the intial signup, this has certainly increased as people finished the course (which also has a call to share).

For example, one day I had a pretty big spike of 100+ people signing up when a few influential devs shared that they recommended the course.

So this "viral loop" where I ask subscribers to share hasn't lead to a huge number of signups, but it is something that sustains the growth of the newsletter.

What I learned (a healthy mix of data, assumptions, and anecdotes):

What I would do differently:

I want to say thanks to the crew who made this newsletter launch a success. There is no doubt in my mind that it wouldn't have gone half as well without all the feedback and support from them.

To Dom, Carolyn, Joey, Fernando, Jillian, and Mike — your detailed feedback was instrumental in helping reach this point. Thanks also to Shawn, Robin, and Rosie for feedback and support in other ways 🌈

And you, of course — if you are a current or future subscriber of Blogging for Devs, I want to thank you, too.

Getting a developer to willingly receive email is no small accomplishment, and I am beyond grateful for the trust you put in me to bring value to your inbox on a weekly basis!

If you're not subscribed yet, what are you waiting for? Get the free email course and start growing your blog. There's no better time to start than now!

Take the FREE 7-Day Blogging for Devs Email Course and learn how to grow your blog without an existing audience (!) through great writing and SEO.